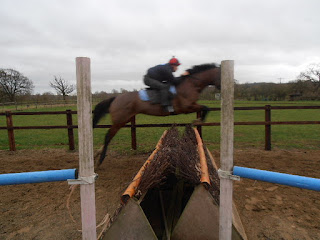 Leon schooling with Michael
Both Doris and Moonie are absolutely fine after their 'mishap' during the week-end.
They were schooled over the big fences today and although Doris was very deliberate first time up, they schooled really well - it is a fine line between being too bold and too cautious and it is a good thing that she is thinking about what she is doing now instead of just crashing through at speed - Moonie didn't seem to have remembered her fall and was just as enthusiastic as usual. We tried her in a french martingale which brings the head down and it seemed to help.
We had a young chap called Michael Mitchell whose parents are good friends of ours - he has just got back from working in a yard in new Zealand where he has secured a three year contract as work jockey but just needs to have a ride over hurdles in this country before he can get a full work permit - he has never schooled over fences before so Will gave him a few lessons on Leon over the hurdle - he was keen to learn and picked it up really quickly, a couple more lessons and he will be ready to go over the big fences, he only has until February before he goes back to NZ so it's a bit of a crash course but I'm sure he will be fine.
Today over the big fences we schooled Laverty, Frog, Oaka, Shade, Leon, Cyril, and as already mentioned Doris and Moonie. We also put Whisper up the line of hurdles but as it was her first time we didn't want to over face her by the big fences. Toby and Shane came in to help and we were delighted with them all.
Frog is entered for Tweseldown on Sunday - she is in a very good place at the moment and schooled brilliantly so we are hoping not to have a repeat of last week-end, although if the ground is too soft she may struggle as she prefers it top of the ground.
Jay is on her way back from University to drop Titch off as she is going to catch up with some friends at Nottingham - better get some supper on.
Posted by Pauline at 11:31