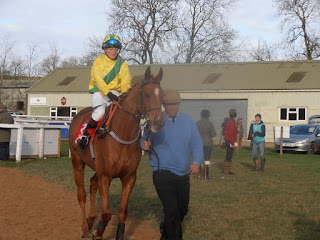 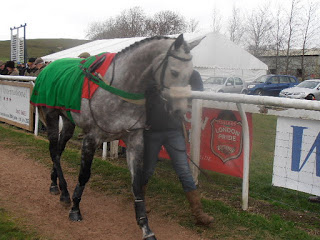 Haunted House and Cloudy Moon
Not the best day's racing as Moonie fell five fences from home -she over jumped and buckled over on landing. It was the downhill fence right over the other side of the track and the same fence that Doris unshipped Will on - it looked a soft fall from where we were standing but they put the screens around her and didn't move them for what seemed like an age, by which time we had begun to fear the worst. Lucy went running over and phoned to say that she was just winded. We were so relieved. She was actually going very well and in the leading group when it happened, so, although she fell, she has shown enough for us to want to persevere with her and try and get her to jump with her head in the right position rather than 'sky gazing'
Aitch was the next to go and he looked absolutely fantastic in the paddock and behaved beautifully - we had heard from Emma (his owner) that he was a complete nutcase in the preliminaries before when he was with Henry Daley, but he couldn't have been better. Amy had a really good first ride and absolutely loved it. It was a really hot Ladies race with Kicks for Free as favourite and they went at a frantic pace. She very nearly came off at the first fence, but then regained her composure and did a circuit and a half. She then had a little mid air collision with another horse as it jumped into her, lost her iron and very sensibly pulled up. We were all over the moon that the partnership had stayed together and that they were both safe and sound. Emma was so happy to see the change in Aitch as she had been told by past connections of the horse that 'he was a nutta and should be shot' It was also very emotional for her as it was the first time her fathers colours had been on the track since he had passed away. His legs were fine this morning which is quite astonishing as they were really not good at all when he arrived 18 months ago and we didn't think we would ever get him on a racetrack. It just shows that you should never give up and some horses are worth the effort.
Will had a dreadful day and had his third fall in a row on one of Gary Hamner's horses, a full sister to Border Fusion, who very sadly broke her shoulder and had to be put down. Very sad.
The highs and lows of racing.....
Posted by Pauline at 10:23