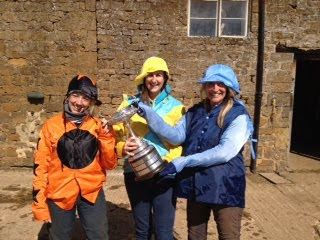 Jake won again!!
The Motley crew, (Laura, Lucy and moi) feeling a little jaded after last nights celebrations
Jake ran an absolute corker and won by ten lengths hard on the bridle - what was so exciting was how much he wanted to do it and went around the track with his ears pricked and standing off every fence. Peter Mann gave him a brilliant ride and they have now really clicked together - he was absolutely full of beans this morning so we may run him again this Sunday at Guilsborough as it is his last chance of running in a point to point before Cheltenham. Laverty wasn't his normal self and although he kept with the pace the first circuit he didn't seem to like the tacky ground so Peter pulled him up as then we can run him again sooner rather than later. We will get him blood tested to see if there is anything else wrong as he did seem rather quieter than usual.
Posted by Pauline at 11:14