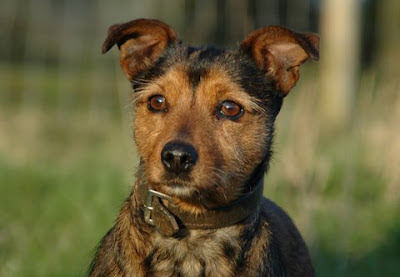 We have had a very worrying few days - Lucy, Doug's lovely little brown terrier went missing early on Tuesday evening when I was getting the horses in. At first we weren't too worried as she has disappeared for an hour or two before and always come back, but when the darkness drew in and she still hadn't returned we went to the nearby woods to see if there was any sign. The place is riddled with a massive network of badger holes, some of which, according to the locals go down more than 35 feet. We couldn't hear or see anything so had to go back to the house knowing that Lucy was going to have a very uncomfortable night as she definitely would never choose to miss her supper. She still hadn't returned the following morning so I spent a lot of Wednesday calling for her in the woods to no avail.
On Wednesday evening I had a horrible feeling she may have drowned in the river and decided to wade through a stretch to see if her little body was caught up in the reeds - Poppy and Titch were following me on the bank, but when I reached the weir and got out Poppy had disappeared. Part of the river I was searching had gone through the woods so I dashed back there hoping that Poppy had found Lucy's hole to try and rescue her and would be barking, therefore giving us a clue of her whereabouts - However, there was an eerie silence and absolutely no sign of either dog. I couldn't believe that BOTH dogs had now disappeared into thin air with no clue at all of where they might have gone. Poppy is a lot smaller and more athletic than Lucy, so when she didn't return for her supper I knew then that it was really serious and that we would be very lucky to see either dog again. Wednesday night was spent searching with arrangements being made to get the Bicester terrier men out the following day to see if they could start digging, although it was going to be an impossible task as there was no clue at all where they could be. Another sleepless night, but at around 7.30 am Doug found a trembling Poppy, covered in mud and soaking wet, huddled under the trailer absolutely terrified. A massive relief, but then we could only assume that as Poppy had failed in her mission and come back without Lucy, and in such a state that Lucy was no longer alive. At 10 am we were all very upset and sitting in the shepherd hut just discussing the next move and how we could recover her body, when a bedraggled, wet (slightly slimmer) Miss Brown limped into the yard and flopped exhausted at Doug's feet. Thank Goodness!! We were overjoyed. They had obviously been bailed up by a very angry Mrs Badger with young and somehow managed to give her the slip.They are both very weak and clearly lucky to have survived the ordeal - I don't think they will be going down any holes for a very long time... I can just about cope with dogs dying or being killed by 'forces of nature' but the thought of them dying slowly. so close to home and us not being able to do anything about it would have tortured me, so it was a wonderful result.
Anyway, back to horses - Frog came third out of ten on Saturday, settled beautifully and looked as though she was going to run a big race but then dropped back a little and sadly finished lame. She is a very fragile horse with very little bone but loves firm ground so it has always been a bit of a risk. We wont know the full story until she has been scanned but she is being a lovely patient and has fallen in love with Leon who she is keeping company in the 'crocks department'
Partly due to this we have decided to rough the other three horses off who were due to run this Saturday as we don't want to risk any more bad legs on watered ground - So it is now HOLIDAY TIME!
Posted by Pauline at 06:42