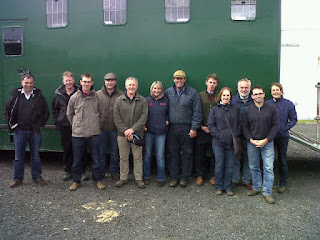 Have just got out of hospital after having my knee reconstructed - I'm full of painkillers so not feeling too bad at all really except the splint on my leg is huge and very cumbersome, making it difficult to sit down or get comfortable.
We had a great week-end before I went under the knife as we hosted the Beckett Nuffield week-end. Every year the Nuffield scholars that were sponsored by Alan and Anne Beckett take it in turns to organise a week-end. It was our first turn and we have had some fantastic weekends in the past so the pressure was very much on. The Beckett scholars are all based in farming but tend to be more entrepreneurial than most so we wanted to have a good balance between farming and diversification. We were lucky enough to book Wormleighton Hall which is owned by Sam and Nicola Burton, good friends and very good farmers, so it was a great base and a good example of farm diversification. On Saturday morning the group were all waiting outside to be picked up by the mini-bus - this turned out to be our horse box with the partitions taken out and bales of hay for seats - much cheaper and good for team bonding! We then went on to Roger and Sarah Ashby's farm, which has now been turned into a go-carting venue . Graeme, the manager showed us around and then we all had a go on the carts - great fun and it showed the different levels of competitiveness within the group.... After which we went on to Willum Butterfields who has a beautifully managed farm with a great balance between farming and conservation. His enthusiasm and love for the countryside was so refreshing and an inspiration for us all - He was very relaxed considering we had to get off the farm by a certain time as David and Sam Cameron were due to visit that afternoon and the police wanted to cordon off the area - We do mix with high society you know!
We then had a picnic on Joseph and Josh's farm and Joseph and Sophie joined us with little Henry - Joseph then came with us to the next visit which was Edgcote Farm where Hamish the farm manager very kindly showed us around, and David Allen (the owner of the estate) was there to answer any questions - a fascinating, understated man who has built up a massive fortune, but you would never know it by his wonderfully humble demeanor. Everyone then came back for drinks at Blackgrounds farm and were forced into watching Jake's run at Cheltenham! Then back to a lovely evening meal at Sam and Nicola's - this was all rounded off the following morning by a very informative tour of Sam's farm and a lunch at the Holly Bush. The weekend went really well and everyone just loved our area - it makes you appreciate it even more when you see it through other peoples eyes and we really are terribly lucky to live in such a beautiful area with such a friendly community.
Posted by Pauline at 10:41