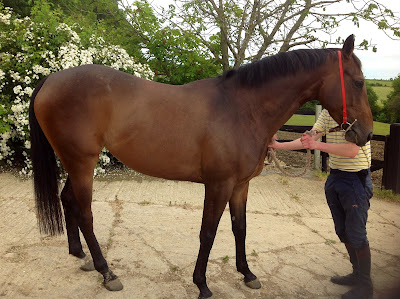 Lady Barfad at Tom Lacey's before she came to us 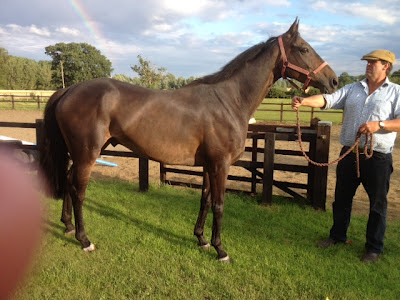 Definite Dawn with Doug (that bloke in the trainer's hat!)

We have also taken the care of a lovely four year old mare, Lady Barfad,who is owned by Juliet White and is going to be trained as part of a syndicate. She has settled in really well and has taken a shine to Christopher's new purchase, Definite Dawn, who we bought from Tim Vaughan's yard. We spent a day at Vaughan's yard before buying the horse and it was fascinating - He is a proper business man and does the job really well, gets the results his owners want but has very little empathy with the horses. He admitted that he normally likes to squeeze every bit of juice out of a horse before selling them, and was sorry that he had to sell Definite Dawn whilst he still had a bit left, but his owners (who are on the rich list) wanted to buy a new batch of horses and are only interested in keeping them if they are able to win grade one races. DD will be perfect for Christopher as he is a very careful jumper but also has the ability to win (even with Christopher on board, sorry C!) and I think we have bought him in the nick of time. The poor thing has almost been institutionalised as he has never been out in a field before and didn't know what grass was except the green stuff that he normally races on. When we turned him out he was horrified at being free in such a large area and frightened himself by galloping flat out round and round. He eventually settled when we put the lovely Lady Barfad with him as all she wants to do is put her head down and eat, she has spent two days teaching him and at last he has started to relax and eat grass like a 'normal' horse.
Posted by Pauline at 02:35