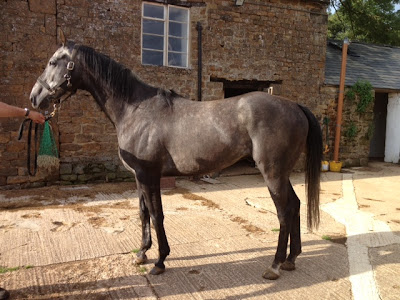 Still no sign of Billy, although a couple of the farm workers think they have heard him at the neighbouring grain store and thought they saw what looked like a parrot flying away from the barn. I've been up there numerous times and there is a huge woods next to the store where he could be living, so I haven't given up hope yet.

We have had a few new recruits on the horse front - one of which we are particularly excited about. Doug spotted him in a field full of horses nearby whilst he was spraying - we made few enquiries and found that he was part of a bankrupt lot from Ireland. He was the best of the lot by a country mile and has a lovely attitude. I looked up his form and watched the DVD of his race in Ireland (his name is Ponty Pandy) He had ran once as a four year old on firm ground - he ran a cracking race and jumped like a stag, but you could tell he was in some discomfort and sure enough tweaked a tendon. They fired him and since then he has just been thrown in the field for two years, his legs feel fine now and he will make a super stamp of a horse when he has filled out. We did a deal with the owner, who grumbled about selling the best horse in the field but nevertheless was happy to take the money and three hours later Ponty was happily making friends with Leon and checking out his new surroundings.