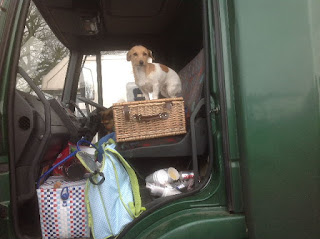 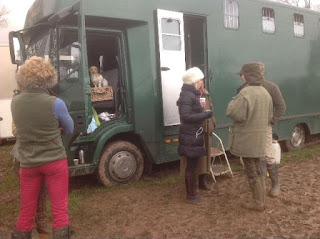 Christopher didn't arrive until it was too late to declare him ( Grrrrrrrr!) so we had to put Peter on board - It actually worked out OK as Peter settled him beautifully and worked him through the mud to finish a good fifth. Without Christopher being able to ride him it was then decided that DD should be settled in behind and taught not to pull himself to the front as he had done previously with Christopher.The plan worked and now the horse is perfectly set for C's members race late January. Horses were finishing completely exhausted so we decided not to risk Ponty but to save him for better going.
Although it wasn't great racing, with so few finishers, it was a lovely social event and good to catch up with everyone - just to do a bit of name dropping Zara Phillips was parked next to us in her lorry (neither of her two horses finished) The tractor driver who towed her in very proudly tweeted that he 'had just pulled Zara'! I had a long chat with Sam Whaley Cohen about his win on Long Run in the King George V. He was still beaming from ear to ear about it, and it is wonderful that he still turns up to ride his horse, Ashtown Boy, in a lowly race in the mud, knowing that he doesn't stand a chance of winning but just wanting to take part and enjoy the sport. His father, Robert, was saying that the runner up in the big race, Dickie Johnson (who coincidentally used to go out with Zara) was fined for use of the whip, and that had his horse Long Run been beaten by him he would have been somewhat aggrieved as twice now he has been beaten by a short head in races worth half a million by horses who's jockeys accrued a penalty for overuse of the whip but didn't get the race taken from them - His argument was that if the horse keeps the race, even after the jockey has effectively been done for cheating then how is the sport ever going to stop the whip being used over the legal limit?. I can see his point as with a race that is worth hundreds of thousands then a little fine and a short ban isn't going to stop some jockeys from going over the limit, therefore penalising the ones that stay within the whip rules.
Anyway, we had the usual picnic by the lorry, and even though we were standing in a bog it was all very jolly.
Mad dogs and Englishmen.............
Posted by Pauline at 08:56