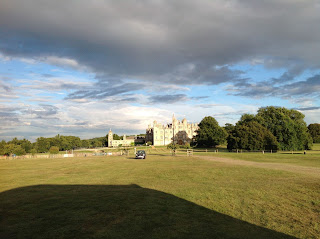 This was our view from our Hotel D'Lorry during our stay at Burghley. We had the lake on our right and the house in front. In the mornings when there was no one else about with the mist rising from the water and the geese taking off it was a beautiful place to be. Three hours later you would think you were in a different world with the hurly burly of thousands of people and the car park jammed full. The great thing was they were intent on spending their money and we didn't disappoint in unloading some of it from them. It was a great show for us and the stay cold boots and the tongue plate bits  flew off the shelves. My bike riding was a little dodgy with two UR's (unseated riders) but I have to say that a stewards enquiry was called on the first time and Doug was found guilty of reckless riding and he even admitted it. The second time was perhaps jockey error but fortunately no harm done just a little embarrassment caused. Back home now and great that Dickie and Annette have looked after everything so well in our absence.
Posted by Pauline at 13:17