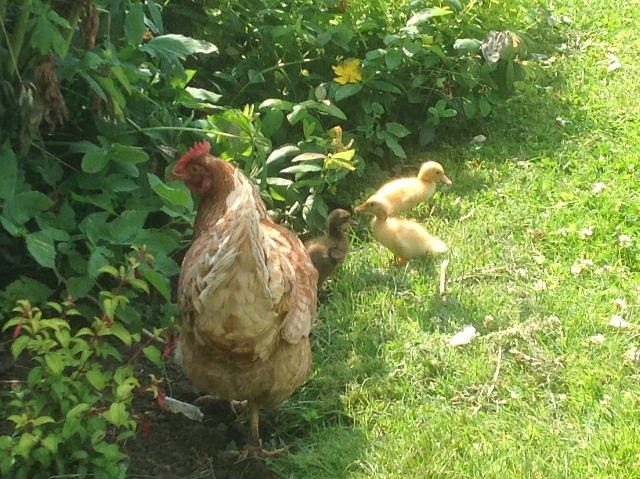 This is one of our oldest ex battery hens who went broody. As her own eggs weren't fertile (we have a gay cockerel) I put some  duck eggs under her. This doesn't always work as the incubation period for duck eggs is one week longer and also they need more humidity. The broody duck will normally come off her eggs occasionally and have a swim which then transfers the humidity to the duck eggs, but obviously a hen wouldn't be so inclined.... We would be pretty worried if she did! Anyway she sat tight for the extra week and four sweet little ducklings have hatched out. She is totally besotted with them and very protective. She launched herself at a rather disgruntled Spud yesterday when he was just taking a friendly interest. Today when it rained she got terribly upset when her children didn't want to shelter from the rain but preferred to paddle around in the puddles. 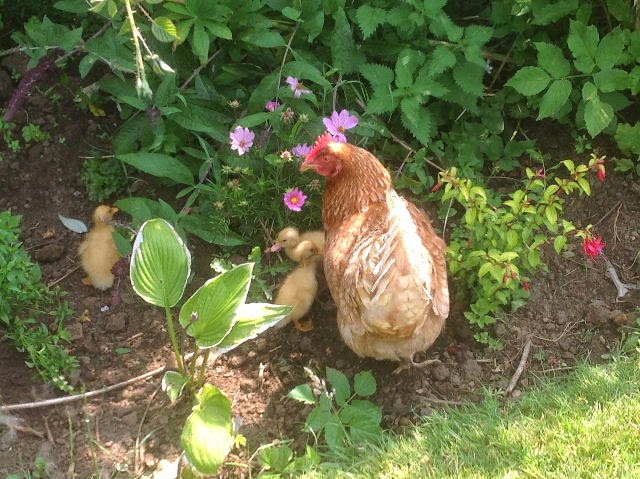 It never ceases to amaze me that a battery hen, who's never had a mother looking after her and who was totally institutionalised, with generations of her family being the same, would still have the very strong natural instinct to sit on eggs and then rear them in such a loving way. It is so lovely to give her the chance. 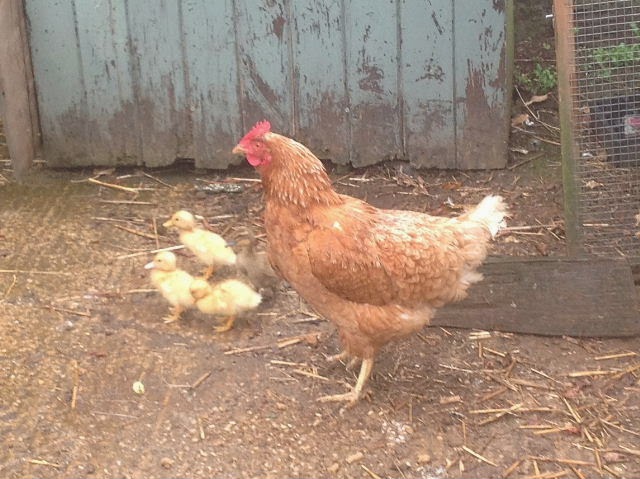 We are having a restful Sunday today after another very social week.
On Thursday David and Ann Allen had 'An English Garden Party' .at their lovely Edgcote. The weather was perfect, unlike last year when we were all huddled under umbrellas. With the clunk of crochet balls, the string quartet playing in the background and a copious amount of Pimms, overlooking the stunning lake it was indeed a very English garden party. A real privilege to be there.
Yesterday afternoon we went to Tom and Kerry's wedding party. We met them through skiing. They are both so full of life and fun and as some of the skiing crowd were there it was an absolute hoot. Sadly we had to tear ourselves away as we also had to go to a 50th Birthday party that evening which we were rather late for but as there was so many people there it wasn't really noticed. It was good to catch up with a few locals and spent some time chatting to a good friend of Jay's, Harriet Page who knows the owners of the restaurant that Jay is working at, Claudes Kitchen and apparently they are delighted with her cooking and cannot believe how good she is considering she has not been formally trained. Jay has now rented a house in London which Harriet is hoping to share with her in the near future
Posted by Pauline at 05:13