No racing this weekend so after a big week of work all horses have spent the weekend out in the fields enjoying themselves.
On Friday we went to Sandown watch Harry Wallace, our stable jockey take part in the Royal Artillery Gold Cup. He was riding Newton Thistle, a 10-1 shot who, in a very exciting race, gave it a fabulous ride and looked as though he had the race in the bag, until Jenny's Surprise (the favourite) with Brodie Hampson on board caught him just before the line to win by a length and a half. Harry was gutted to be beaten but when he found out that Brodie's father was dying of cancer and only had a few days to live, and was there to see his daughter win, it seemed like the right result after all. 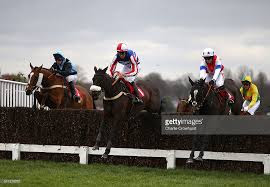