When we got back we were contacted by ITV news who wanted to do a story about our situation with HS2 - Having had a very productive meeting in Parliament with Andrea Leadsom and Paul Maynard, we originally declined but then decided that for the sake of the other victims of HS2 the public need to know how badly they are treating people and the extent of their lies and corruption. It was aired last night and we have had a fantastic response, and once again huge support from so many people. It makes you realise who your real friends are and how lovely people can be. It very much restores your faith in human nature.
The meeting in parliament on Wednesday resulted in us getting a 'stay of execution'. In attendance were four representatives from HS2 including the head of acquisitions, James Tyler Morris. Andrea persuaded the acquisition team that we should be allowed to stay at Blackgrounds until April the 15th assuming that we have been made a fair offer by then, if not we will be staying longer. She also gave them a real telling off about our treatment and how disgusted she was with them for making such a pitiful offer. Paul Maynard, Grants Shapps second in command, also joined in with the reprimand and was furious with them for 'bringing the government into dispute.'
It was a massive relief for us to have more time to provide our own forensic accountant with further information and to continue to look for somewhere else to live if necessary. We are very lucky that we have Andrea Leadsom, who is our local MP, to help us as I don't think we would have been listened to with any other MP.  She is a very strong and fair minded lady and should not be underestimated.
While we were away Sarah organised Ted thistle and Glory Hunter to have a run at Thorpe. Scott Malson rode them both and did a fabulous job of looking after them in desperate conditions. It rained non stop and apparently the mud was a foot deep along the back straight.  They were both pulled up but were at least with the field before weakening a couple of fences from home. They both finished wanting more and will now be fit and ready to go for when the ground dries up, hopefully at Chaddesley Corbett next weekend.  The team of Roy, Carol, Sarah, Maria, Jane and Henry did a fabulous job in very difficult cold and wet circumstances. We tried not to feel too guilty about sunning ourselves on the beach!!
However, the most exciting result was our home bred out of Velvet Dove 'Smoking Pidgeon' running a very close and fast finishing second at Cocklebarrow. He must have been very impressive as there was even a report about him in the European Bloodstock report naming him as the only English pointer in that week who was a Star Performer. SO proud of him and wonderful that the Dove line is continuing in such style. 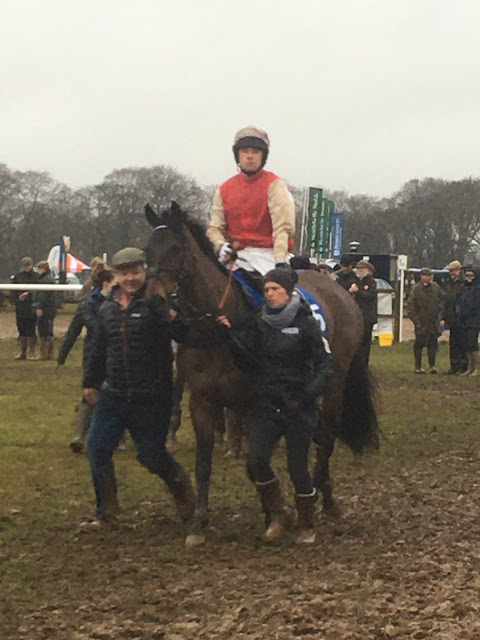