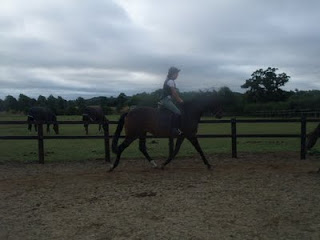 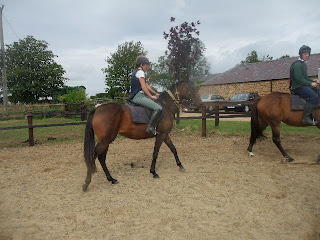 All going well here - the young horses are taking up a bit of time, John Ap. came to see how his youngsters were coming on and in typical style, having gone really well yesterday they decided to be fairly mulish today, Blondie was probably the best of the bunch, Eeyore lived up to his name and was 'donkeyish', Frog was lively and didn't relax, Cloud was good but you get the feeling that there is more to come with her and Dolly was absolutely the star of the show - when the saddle was first put on she threw herself on the floor twice and it looked as though we weren't even going to get Amy on board, but then she suddenly relaxed and did the most beautiful floating trot. Amy said that she felt amazing.

After horses I had to catch up in the office and get it all done before my parents came for a visit with some of their friends from London. We talked about how the riots had affected them and although it hadn't directly, everyone is just in shock that it could happen at all. It really is just shameful. Things are settling down now, but it leaves a very bad taste in the mouth to think that we have people in England that can act in such a despicable manner. Mum had a fall yesterday and wasn't good at all. She could barely walk and really shouldn't have ventured out.

The news from Australia is that the farm didn't reach it's reserve price, which is a terrible shame for Doug's parents as they really don't need the stress. The one good thing is that now that Doug has been out there and met the manager, and knows what needs to be done, hopefully it wont continue to make a loss.

We are out to supper at Edwina's so must go..