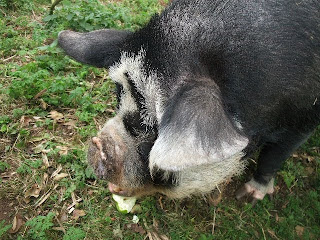 Every morning Matilda and I have a race to see who can get to the orchard first to pick the windfall apples - I like to store them at this time of year for the horses and the better one's for cooking. Matilda has been getting up earlier each morning to try and beat me, but this morning she won hands down as we went cubbing with the Bicester and they met at first light. When I got back at lunchtime the orchard had been completely hoovered. I think she may have snuffled out all my new bulbs as well which is rather annoying. Prudence who is somewhat less athletic heads off each morning at a more sedate pace to the nearby oak tree to eat the fallen acorns, whilst Matilda positively sprints across the paddock - it is hilarious to watch.
Hunting was somewhat eventful - I was on Dove and Doug was on Harry. I rode Harry yesterday with Lucy on Red and Doug on Dream and didn't think he felt right. He was really wooden on one side but we put it down to the fact that he had a different bit in and he had also got cast in the stable the night before and was probably a bit stiff. Anyway, this morning out hunting, Doug wasn't happy with him and said that he didn't think he should jump him as he wasn't right. However, the hounds were running and we were in a field where the only option was to jump out over a post and rails fence with sheep wire in it. Harry made a complete horlicks of it, his front legs went over but his back legs just crashed through, Doug was catapulted out of the saddle, and Harry was stuck in the wire. I was sure he was going to break his leg as the wire didn't look as though it was going to break and Harry was beginning to panic. Thank goodness the fence broke and Harry was able to get his hind legs free. A horrid moment. Funnily enough when Doug got back on board he reported that whatever was the matter with Harry before, the fall seemed to have cured as he was perfectly alright. He has been given bute (pain-killers) in his supper, but he should by rights be a little sore tomorrow.
Ironically since we have installed the (HUGE but not working yet) aga in the kitchen our faithful little electric cooker has gone on strike - the element has gone so we are just on our way out for a bar snack with Bay and Hermione (Amy's parents)
Posted by Pauline at 09:55