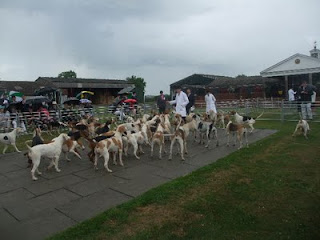 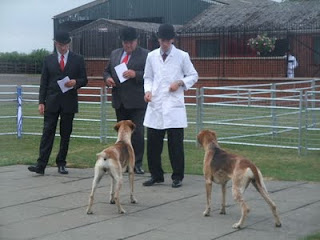 On Thursday afternoon we went to the Pytchley puppy show - it is wonderfully traditional and has been going on for over a hundred years - there are always two judges, normally masters/huntsman from other packs who inspect the new hounds for the season in pairs and then decide which one's make the grade - the one's that don't are ignominiously scooped up and carried back to their kennel, they then decide which hound should be the champion and which the reserve (Boozy and Bramble this year) They then parade the best working hound for the last season (Prickett) and then we all go into the marquee for tea, where the puppy walkers get their prizes - Fox hounds aren't the easiest as (obviously) they love hunting and often escape to do their own thing, they are extremely boisterous but lovely and it has been known for a puppy walker to get so attached to their puppy that they can't bear to part with it. Having watched a real tear jerker of a film last night called 'Marley and Me' starring amongst others Jennifer Aniston, (It was about a boisterous family dog who got old and had to be put down - SO sad) I can understand why this could happen. They REALLY deserve their prize. Anyway, we met a lot of old friends who we hadn't seen for a while which was great.
We then went on to meet up with some local friends for a bar meal - we were supposed to be giving the seal of approval on a new 'girlfriend' for a friend who has been unhappily married for 25 years and after three years of separation has just ventured out with his new flame - not new for him as apparently he had been engaged to her when they were both eighteen ( 46 years ago!!) It was a bit strange as we were all used to his old model but she seems very nice and we can only hope that it works out for him this time around.
My computer has been playing around which is why I'm a bit behind on the news - it's getting late - we have been for a cycle ride and then we walked for a meal to The Griffin, nothing much to report but will catch up in more detail tomorrow.
Posted by Pauline at 14:05