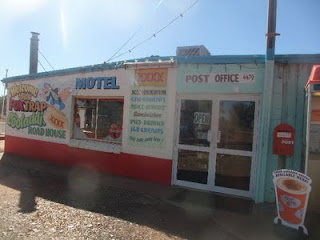 Thursday 28th July
After breakfast at Charleville, we went through Morvan, Mitchell, then Muckadilla, where outside the pub they have a bench with a plaque on it saying "The bench of bullshit"! I'm sure there is a story there but I don't know what it is. We went past massive 53 metre road trains full of cattle - the road follows an old railway track all the way from Quilpie to Brisbane (1000 km)which is used for trucking cattle , cotton seed etc.
At Roma we stopped for an ice cream and diesel - the road is dead straight and just goes on and on - you can see why falling asleep at the wheel is the main danger, the main point of interest is the road kill. mainly kangaroos (red ones out west, becoming grey the further east we went) with the occasional wild pig. We got to Yulebah at about 1 pm and then even the dead Roo's dried up and the drive to Dulacca, then Miles became somewhat dull. We then got to Chinchilla where they had posters up everywhere about a melon festival. Hmmm, I don't think we will rush back for that.
Dalby was our next town which is a big cotton and grain area and had massive grain stores on the side of the road next to the railway line - the fields were enormous and made you realise that if they have a good harvest it could really determine the world market price for grain - they have such low input costs compared to the UK that there really is no competition.
At last we arrived at Toowoomba which is where we had intended to stay the night and then Doug could go to the gunsmith the next day.
Doug had his favourite rifle which he had decided to leave with his old friend, Mick, the Roo shooter. Mick lives on the outskirts of Toowoomba so we popped in to see him for a coffee laced with bunderburg rum. Doug and Mick go back a long way - When Doug was working on his fathers farm, Woodlands in 1992, there was a terrible drought and their cattle were dying. The only option was to take the whole mob of approximately 1000 head onto the road, using the ancient stock routes , these stock routes go back to 1828 and stretch 2000 miles across Australia, it is common land and anyone can use it as long as they travel the stock a minimum of six miles a day so that the route doesn't get overgrazed. Doug and Mick were on the road for a total of 18 months, although there are designated watering points along the route, sometimes the water wasn't there so it was Mick's job to go with the lorry and a tank and find water each day while Doug and his dogs drove the cattle - it must have been very lonely at times, but they would have had some fun as Mick is a real character. After 18 months the rains came and Doug was able to sell the fat cattle at Roma, and the breeding cattle were put on the train for their journey back home, they lost a few who were too weak to travel but saved the majority. It must have been an awesome experience.
It was great for Doug to see Mick again who although he had had a stroke was looking really well, Mick's son Woolley and his grandson, Douglas (!) also came to have a chat.
We then left to find a motel in Toowoomba and something to eat. We were exhausted.
Posted by Pauline at 11:31