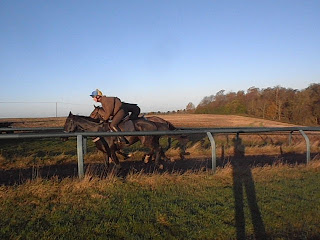 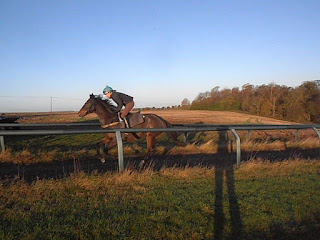 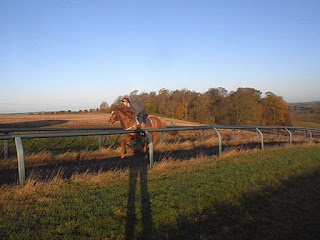 Paddy and Jake (top left) Dolly (right) and Frog on the gallops.
All horses had a big day today - Doris, Jake, Shade, Frog, Laverty and Dream schooled up the big fences and we were delighted with them all, particularly Doris who had never been up them before and was a real natural. She absolutely loved it. The other horses did three times up the all weather and worked very well. Doug is sidelined at the moment as he hurt his hand hunting on Saturday when Jake pecked at a fence, he had it X-rayed a couple of days later as he was still in pain and it showed that he had broken a bone in his hand, it was decided not to pin it but just to strap it up as long as he didn't do too much, but in true Doug style he carried on riding etc, but then tried to put a shoe on Doris this morning and he is back to square one - grrr, he just wont be told!
All is set for Saturday with Doris having her first run over fences and then Aitch and Moonie on Sunday. Amy schooled well this morning on Shade and then on Dream - It is all coming together now, there are so many things to think about when you first ride over fences at speed and it takes a while for everything to fall into place, but she is doing really well and Aitch should give her some spin. It will be nice for all of us to get this first run under our belts - I am trying not to get too nervous about it but that is easier said than done.
Jay was at home for the week-end, since she was last back she has cycled to the other side of Brussels (on her own) as she was going to a concert, and meeting up with some friends who brought her back. She has now taken Titch (our Jack Russel bitch) back to university with her, I'm sure that will help with her studies.... that girl is as mad as a box of frogs and it worries me greatly where she has got that from....