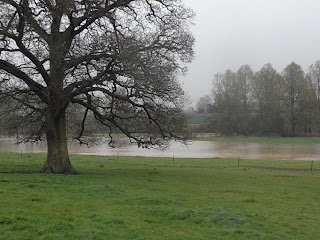 ﻿﻿ ﻿﻿ Be careful what you wish for...It doesn't seem long ago when we were moaning about the dry weather and now it has rained on and off for the past two weeks. The river Cherwell burst its banks last night and the river has flooded into our bottom meadow. I couldn't resist going fpr a 'swim' and couldn't believe how fast it was flowing - I got in near the Culworth rd and it took me all the way to the Mill House. There were a few hairy moments going under the two bridges as I had no option but to go with the flow which took me under the water - it was awesome, particularly when a kingfisher caught a fish right in front of me and then flew alongside before eating its
catch on a post nearby.

Needless to say racing was abandoned today, but we took Harry (Unoitmakessense) and Laverty to Whitfield yesterday. Laverty came third and ran his heart out. It was a bit tricky as we had given Toby his instructions whilst saddling up (to be handy) and then in the paddock, just before he got on, the owners told him that they wanted him switched off out the back - they were worried that he wouldn't stay if he was near the front as he used to get quite strong if he wasn't covered - however, with age Laverty is much better at settling and hasn't got the turn of foot he used to have, so when Toby did as he was told and dropped him out 12-15 lengths behind he was never able to catch the leaders who finished about 12 lengths in front. Toby was a bit cheesed off as he thought Laverty could have won, especially as it was the first time we have had the ground he likes, but the owners pay the bills and they thought it was the best thing to do. We were very proud of Laverty who always tries his best and has been a little star. He will probably retire from racing now, and will do so with his head held high.
Well, now on to Harry.....Harry was his normal over enthusiastic self, he galloped off to the start and forgot where to stop so Pete had to do a few circles before he could pull him up - Then the flag dropped and off Harry went, jumped surprisingly well for the first three fences, got to the fourth near the crowd, stood off a mile and whoops, down on his nose, jockey pulls off bridle, and off he goes again, bridle less but as happy as ever, oblivious to the fact that he had no jockey or bridle on. Just a nice little gallop around really...He was eventually caught with no harm done, and most importantly Peter was fine, just rather annoyed as he had high hopes for Harry as he had been feeling so well during the week. What now with dear Harry? - Pete doesn't want us to give up on him and wants to ride him again next week-end. Jo has spent a lot of time with him in the school to stop him from twisting over his fences, which used to be his problem, and Pete said he felt much better, now we have to curb his enthusiasm - someone suggested blinkers as that can make a horse concentrate at the fence - although it can also make a horse keener, which is the last thing we want for Harry - We will school him with them on this coming week and see how he goes and then decide what to do with him.
Only three days to go before Doctor Kingsley's big day at Cheltenham - Doug is besides himself with excitement - we don't want much more rain as the ground is perfect now.....
Posted by Pauline at 13:36