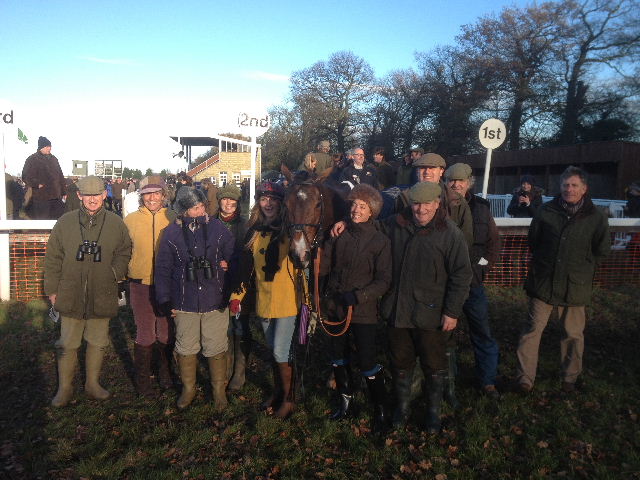 The 'We Never Give Up' Club

Jess delighted us by coming second in a field of ten, to a very good horse that the Ruckers had bought for £35,000 - She also won 'best turned out' , so Laura is off to a flying start, having won 19 best turned out prizes last season.... She looked extremely well in the paddock, to the point where someone said to Laura as she was leading her around "Is she the one who pulled the guns in War Horse?!" Cheeky B**ger!
However, she ran an absolute cracker and Pete gave her a peach of a ride, had she been 100% fit we are sure she would have won and she will come on enormously from the run. She was calling for her food this morning and is absolutely fine. A lovely horse to take racing as she is so relaxed - almost horizontal, which means we can enjoy the social side too, instead of having to rush her home.
We had a great picnic and Doug had made 'Doug's pie' which is a recipe from his mother and included eggs, sausages, mushrooms, cheese and anything else you can find - The owners loved it and as they were leaving they asked Doug for the recipe, as quick as a flash Doug replied "It's not very easy to make as it's so difficult to get fresh badger at this time of year" You should have seen their faces!
A really great start to the season and we now know that we are on track with the other horses, who are ready to run but have nowhere to go!
Posted by Pauline at 11:12