A great photo of the two horses battling it out in the Aga Ladies final at Stratford.


It was a stunning day today. It really is the most beautiful time of the year. Everything has burst into life and it just fills the senses.
Yesterday we took Velvet Dream for a walk in service by 'Native Ruler' at Batsford stud. Sadly she slipped her 'Universal' foal during the winter and she is now ready to be served again. Velvet Dove is about to foal and it would have been lovely to have had them both give birth together as we could have weaned them at the same time and it would have been so much easier to manage, but these things happen. 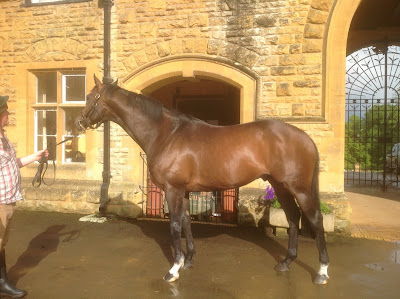 Native Ruler was trained by Henry Cecil and retired early due to injury. He is the son of 'Cape Cross' out of 'Love Divine', an Oaks winner, he is also half brother to 'Sixties Icon'  He has a really big athletic walk and I was very impressed with him. His oldest progeny are three years old so we don't know yet whether he will produce national hunt winners but he isn't too expensive at this stage, and worth a gamble.
We still have nine horses in full work, eight of which should be running this weekend. Depending on the ground we have Noddy (Cupachai) , Cloud, Bella and maybe Elvis (The King of Angels) or Rock running at Hereford and then at Chaddesley we have Budge, Lily, Goody and maybe Cloud as she has been double entered as have a few of them so no doubt I will change my mind a few times about who should go where. Then there will be just one race meeting left at Garthorpe next Sunday before we shut up shop for the season. I can't believe how quickly it has flown by...
Posted by Pauline at 13:51