I have just had the most amazing experience. I was having my evening swim in the river. It had been another beautiful day and the evening was bathed in a golden light. About half way through my swim going downstream I saw a slight movement in the willow bush that was overhanging into the water, and to my astonishment is was a kingfisher, just sitting there looking at me. The sun was dappling through the branches and I was no more than two foot away from it. I stopped and trod water for about five minutes just marvelling at the beauty of its iridescent turquoise plumage. It then flew back up stream and I thought that would be the last I would see of it having never seen a kingfisher perched before. However, on my way back up stream, there he was again, even closer to the water and didn't bat an eyelid as I swam right past. I can just see him going back to his family and saying "Crikey, there's a whale in the river - that would feed us all for a year!" However for me it was a very special experience and one that will probably never happen again as they are notoriously shy birds. 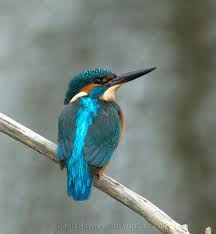