Oh the highs and lows again.....Glory Hunter (Murphy) won his race but poor Fill the Power with his owner rider, Peter Bennett on board had a fall and he broke his shoulder so had to be put down. Peter said he jumped the fence well but then slipped on landing. We hadn't had him very long but he was a really lovely horse and will be very much missed. Peter was also devastated and has decided to hang up his boots after 30 years of race riding. A very sad way to retire but probably for the best for his wife, Annie.We were all so upset about Phil that we really didn't want to run the other two horses, Murphy and Noddy, and when Murphy went down to the start I hid in the lorry because I couldn't bear to watch. I listened to the commentary and heard that he was 10 lengths detached from the rest of the field and being ridden along, so gave up listening, but then heard that he was 10 lengths in front. I couldn't believe it!! He has been quite a difficult horse in many ways as he had some hard races in Ireland and used to be absolutely terrified about racing. He used to drip with sweat and then after racing stand in the back of his stable and not eat. He is totally different now and absolutely loves racing and is full of confidence. Graham and Irena his half owners have been very patient and it is lovely to reward their patience. 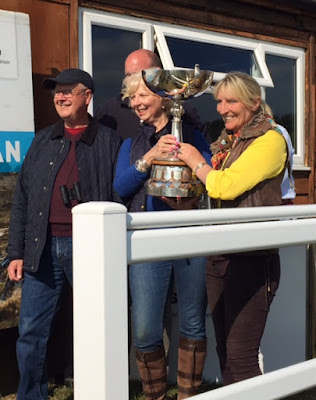