We have just had another little sneaky break away on our annual Beckett Nuffield scholar weekend. This time it was in West Wales - around the Cardigan Bay area. The trip started off well on Friday evening with a boat ride around the bay where we saw dolphins playing in the water - I didn't think it was possible to see them so close to the UK shore and it was a real thrill. I also had a swim and although it wasn't quite the Aegean sea it was lovely anyway, finished off with fish and chips on the harbour wall.  Our accommodation was at a glamping site twenty minutes inland which was met with a slightly bemused reception from some of the 'steadier' scholars but they were very glamourous expensive tents with proper beds and goose down duvets and a hot tub so it wasn't too much of a hardship and it ended up being really good fun.
The trips the next day consisted of a visit to Castell Howard where we were shown around by the founder, Brian Jones, who was still bubbling with enthusiasm even at the age of seventy he was still as excited about his business as he would have been as the beginning. The scale of it was difficult to comprehend, but they have also started off Celtic Pride a beef supplying business, which was easier for me to understand as it was all about meat and eating quality which was my study tour when I did my scholarship. Really interesting to see how things have progressed and slightly frustrating that they haven't progressed enough to my mind... We then did a college dairy farm where they have a had a huge grant for a plant to separate slurry from water, hopefully ending up with solids which can go back on the land and water that can be recycled - apparently it is the first of its kind and is due to begin next month. We ended the day with a 'dog and stick' beef farm but where the famer had recorded everything and was showing us the financial difference between calving at two years compared to three, the difference between big cows and little cows, the importance of block calving and short gestation bulls - It was amazing how much difference small things like that made to his bottom line and it made you wonder how your normal beef farmer made any money at all as the margins were so small. 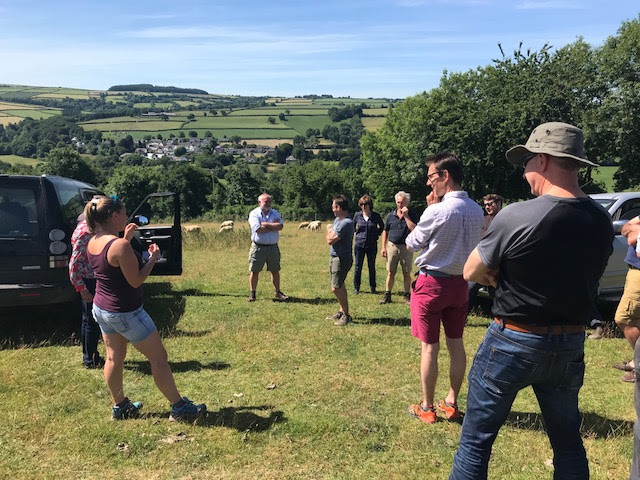 After another night in our huge tent (listening to everyone's snoring!) we visited our hosts farm. Jamie and Deyone - A very hardworking young couple that are trying to make a go of dairy and sheep farming. Beautiful surroundings and they are doing really well although the big question has got to be asked, how will they and farming in general get on if subsidies are scrapped as Wales seems to get more than its fair share.?...  I am sure if anyone can manage they can. We had a lovely lunch in the sunshine and then said our goodbyes for another year. A great trip and as always really thought provoking and uplifting.
Posted by Pauline at 13:39