We are still waiting for the Kayf Tara filly to foal, she looks as though she has got a couple more days to go - Mary is doing really well and is extremely self opinionated and already gallops around the field on her own. She is going to be a handful I think, but a very athletic one!
I have just suffered watching the English football match against Columbia. They were one goal up and it looked as though they couldn't have cared less. I may be very wrong as I normally watch Rugby, but there just didn't seem to be any sense of urgency at all and most of the time they seemed to be kicking it back to their own goalkeeper rather than pointing the ball in the right direction. Then they were shocked when Columbia scored and started to play a little then but honestly compared to other teams they looked very average. They were very lucky to win in the end with a penalty shoot out. I felt very sorry for Columbia, a third world country with a much lower population than the UK and obviously much lower paid players. We were horrified to see Jamie Vardy chewing gum and blowing bubbles whilst playing!!?? Call me old fashioned if you like but how can you honestly say that you are trying your gut bursting hardest whilst chewing gum and blowing bubbles?  Doug said he might as well have a fag and a beer on the go as well! 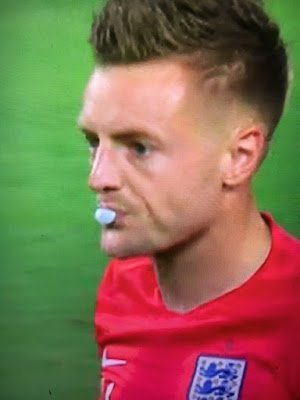